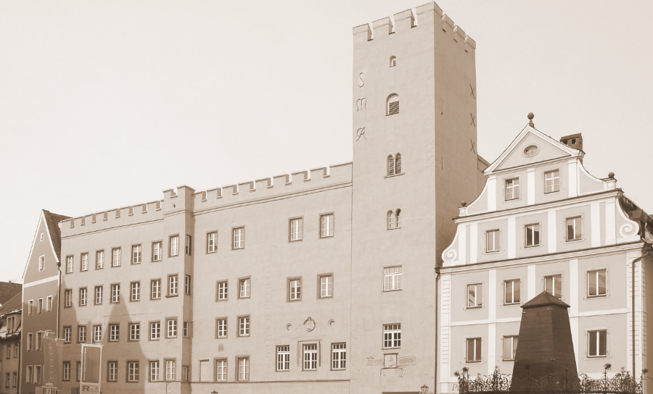 The history of the Hotel Goldenes Kreuz

In this house has lived

Who was known throughout the world

This inscription can be seen on the front facade of the Hotel Goldenes Kreuz. Charles V. Holy Roman Emporer, King of Spain and Naples, Sovereign of the Netherlands and Archduke of Austria (only to name his most important titles) chose this luxurious house on Haidplatz in Regensburg as his quarters for the third time in 1546, while he joined the meeting of the Reichstag in Regensburg.

Emperor Charles V. had a lot of good reasons for coming back to this hotel. The house, whose eastern wing traces back to the 13th century, has been Regensburg’s finest adress for many centuries. Even today, the building sticks out of downtown Regensburg due to its façade which resembles a medieval castle. Since the 16th century, the house was used as a hotel. Emperors, kings with their queens and sovereigns of all over Europe used to choose the Hotel Goldenes Kreuz as their quarters while they stayed in Regensburg. In 1531, King Ferdinand I. resided in the hotel, one year later it was his brother, Charles V. who knew to value the comfort of the house while the Reichstag met just stone’s throw away.

On his last visit to the Goldenes Kreuz in 1546, the widowed Charles V. did not only decide on highly important political topics, but also got to know one of the most beautiful daughters of Regensburg, Barbara Blomberg, a young girl he fell in love with. Let us go on reading the inscription:

He hath here at late hour

A boy who resembled his father arose,

Who, at the battle of Lepanto

Charles’s love night in the Goldenes Kreuz showed its results nine month later. The boy, Barbara Blomborg gave birth to, later became famous as Don Juan D’Austria, the defeater of the Turkish Fleet at the Battle of Lepanto which took place on October 7th, 1571. Don Juan’s victory destroyed the mystic invincibility of the Turkish Fleet.

Don Juan’s victory was highly honoured in his days already. The inscription on the hotel however, was applied after the visit of another high-ranking guest to the Hotel Goldenes Kreuz. In 1863, Emperor Franz Joseph of Austria, stayed in the house. As he was quite interested in the story of his ancestor, the inscription was mounted. Franz Joseph’s wife, Elisabeth, or better know as Sissi, attended her husband and seemed to enjoy her visit to the hotel as well. If one wants to believe old tales, she loved to take a bath on the rooftop of the tower and enjoyed the magnificent view over Regensburg.

Some years earlier, in 1851, Sissi’s cousin, King Otto of Greece, used the Hotel Goldenes Kreuz as his camp, too.

Maybe Sissi and Otto learnt about the distinguished quality of the hotel from her aunt, Queen Amelie of Saxony, who had resided in the hotel in 1825, already.

If you look into the guestbook of the house, you will find even more names of high ranking personalities. In 1898 however, the 500 year old hotel tradition of the house ended and the hotel was shut down.

The tradition of giving their visitors - no matter of what origin they were – a princely residence, was kept by the house. Marie Schandri, whose cookery book is still well known amongst cooks, kept on preparing kinglike cuisine on Haidplatz for many years.

The hospitality and relaxing atmosphere of the Café Goldenes Kreuz is today favoured by the citizens and visitors of Regensburg.

The long tradition of the building as a former Emperors’ hotel was revived in 2005. Nine individually equipped rooms today provide the visitors with a highly comfortable interior, which does not only give a convenient completion to a visit to Regensburg, but also invites to dream about how Empresses and Emperors lived in these rooms some hundred years ago.

We would like to welcome you as a guest in this building full of tradition, history and passion and wish you a pleasant stay in a house which has served for more than 500 years as a camp for the guests of Regensburg.